Where Is the Centre Of London?

Where is the centre of London? Why is it there?

The official centre of London is marked by a plaque inset into the pavement behind the statue of King Charles I to the south of Trafalgar Square. Distances to London on road signs throughout Britain are measured from this point. The top of the Victorian replica monument built in the forecourt of Charing Cross Station, the Queen Eleanor Memorial Cross. It is loosely modelled on the medieval original of the early 1290s, which was located a few hundred yards away to the south of what is now Trafalgar Square.

The statue and the plaque mark the site where a stone monument topped with a cross once stood. This monument or ‘Cross’ was one of 12 erected on the orders of the grief-stricken King Edward I in 1290 AD after the death of his Queen, Eleanor: the crosses marked the path of the Queen’s funeral procession from Lincoln to Westminster Abbey. This was the final cross before the Abbey itself, half a mile to the south. When it was built it stood in a small countryside village or hamlet called Charing between the cities of Westminster and London, which were then quite separate. This became known as Charing Cross.

As the centuries passed, the surrounding fields were built on: in particular, Charing Cross found itself next to the royal palace of Whitehall and the Royal Mews, or stables and carriage house. The greater city of London began to spread out.

In the seventeenth century, the Civil War came and the old medieval monument at Charing Cross was destroyed by the Parliamentarians. The statue of Charles I was placed on the site after the Restoration, when England returned to being a monarchy, but the immediate neighbourhood continued to be called Charing Cross. 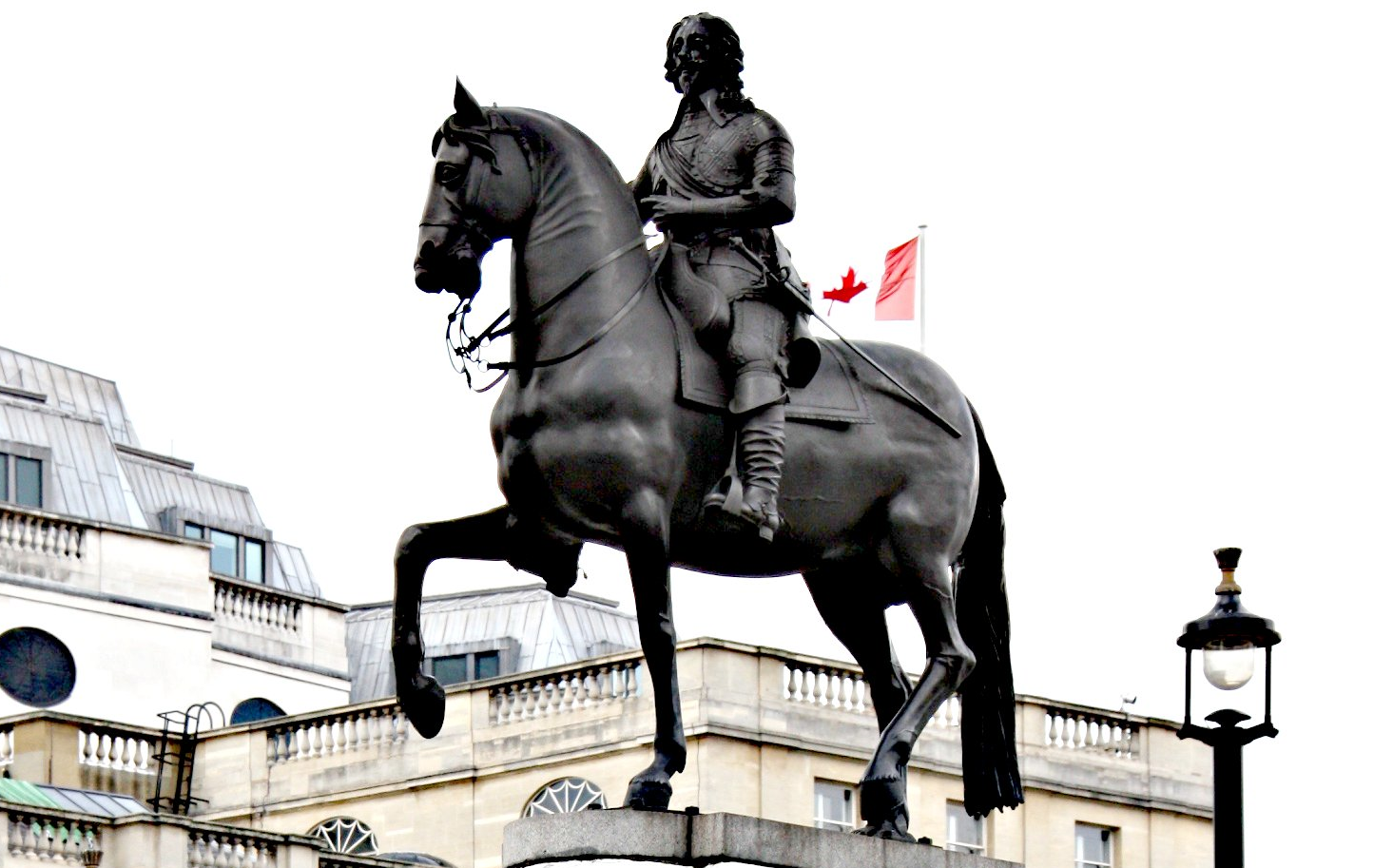 The equestrian statue of Charles I which has stood on the site of the original Charing Cross since 1675. It was made by French sculptor Hubert Le Sueur in the early 1630s for Charles’ Lord High Treasurer Richard Weston. It was to be broken up following the Civil War, but was actually kept in concealment and put in its present position following the Restoration.

At this time there was still no convention that Charing Cross was the centre of London: different guide books and other publications used different locations, and milestones often showed the distance to the then edge of London rather than any central point. There is a hoary legend that the mile stones on the Roman roads of Britain counted their mileages from the mysterious “London Stone” in the old City, though this cannot be substantiated. (At the moment the London Stone’s resting place in Cannon Street is being redeveloped, so the Stone has been temporarily moved to the Museum of London. The Stone has been rebuilt into various new buildings over the centuries.)

The custom of considering the location of the old Charing Cross to be the arbitrary centre of London seems to have arisen in the late 18th or early 19th century. Laws and rules were often written from that period specifying that everything within a certain distance of Charing Cross was to be considered part of London. In 1864 the new Charing Cross railway station opened on the Strand, just adjacent to the new Trafalgar Square, and the South Eastern Railway commissioned a new Cross to stand in the station forecourt - a few hundred yards from the site of the medieval original. London’s black-cab taxi drivers treat this new Cross as the centre of the city: their famously rigorous “Knowledge” training requires them to commit to memory every street and point of interest within six miles of the station forecourt.

There have been various attempts to define the true geographical centre of the much enlarged modern city in more recent times: one such effort suggests that it is located near Lambeth North Underground station, which – controversially to some – lies south of the Thames. The developers of the Centre Point skyscraper back in the 1960s boldly attempted to claim that their building actually stands at the true centre of London, though this isn’t an idea that has built up much of a following.

Battersea Power Station stands just 1.9 miles from the official centre of London at the site of the old Charing Cross. This means that it is more central than City Hall, the Royal Albert Hall, Kensington Palace and the Tower of London, to name just a few well-known city landmarks. If you prefer a more modern datum, the Power Station is 1.8 miles from Lambeth North Underground. This puts it closer to the centre of the city than Marble Arch, the Serpentine in Hyde Park, the British Library and the current US Embassy on Grosvenor Square (though not as close as the new US Embassy being built just down the street from the Power Station in Nine Elms).

A home, office or business at Battersea Power Station can accurately be described as centrally located, however you calculate it.