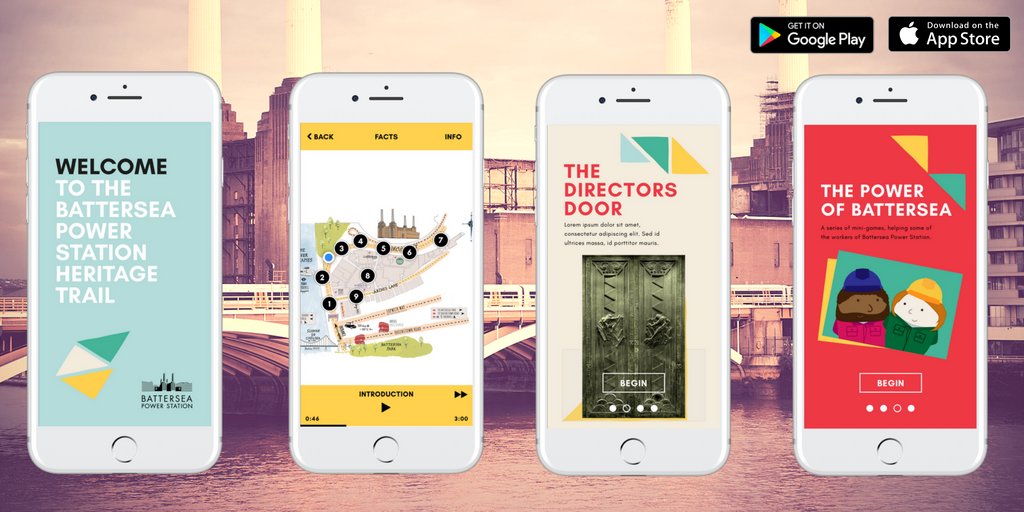 Battersea Power Station is launching a new digital app to celebrate the history and heritage of the Grade II* listed building and its surroundings. The "Heritage Trail" app, which is free to download, explores the past, present and future of this iconic building as well as the wider transformation of this part of the capital into one of London’s most exciting new destinations.

Battersea Power Station, in partnership with leading digital agency Calvium, has created the app to bring to life the fascinating history surrounding this iconic building.

The app, narrated by journalist and broadcaster Jonathan Freedland, guides visitors around Circus West Village, the first element of the regeneration to complete, and provides information, facts and insights into the Power Station’s history over the years at key points around the area.

The app will be officially launched at a special event on Thursday 7 June at The Village Hall, Circus West Village, entitled "Digital Placemaking: Shaping Places through Technology". The team behind the app’s creation will lead a discussion exploring how technology is changing the way people explore places and the role of placemaking in the digital age. See here for more details.

In addition to the Heritage Trail, Battersea Power Station is hosting a series of events and activities in partnership with London Festival of Architecture this June. They include:

Rob Samuel, Chief Development Officer of Battersea Power Station, said: “The Heritage Trail app is a great new way for people to explore this iconic area and brings the concept of placemaking into the digital age. We are delighted to be taking part in this year’s festival of events which, coupled with the great restaurants, cafes and bars now open promise to make Battersea Power Station a fantastic place for people to explore.”

Jo Reid, Managing Director, Calvium, said: “Digital placemaking offers people new and immersive ways to discover the world around them. The Battersea Power Station Heritage Trail is a great example of how the combination of beautiful storytelling and creative technologies can celebrate heritage and foster a richer sense of place."

The Heritage Trail app can be downloaded for free here:

Visitors are encouraged to download the app before they arrive and bring headphones to maximise the experience.

For more information visit batterseapowerstation.co.uk and follow @BatterseaPwrStn for the latest news and events.