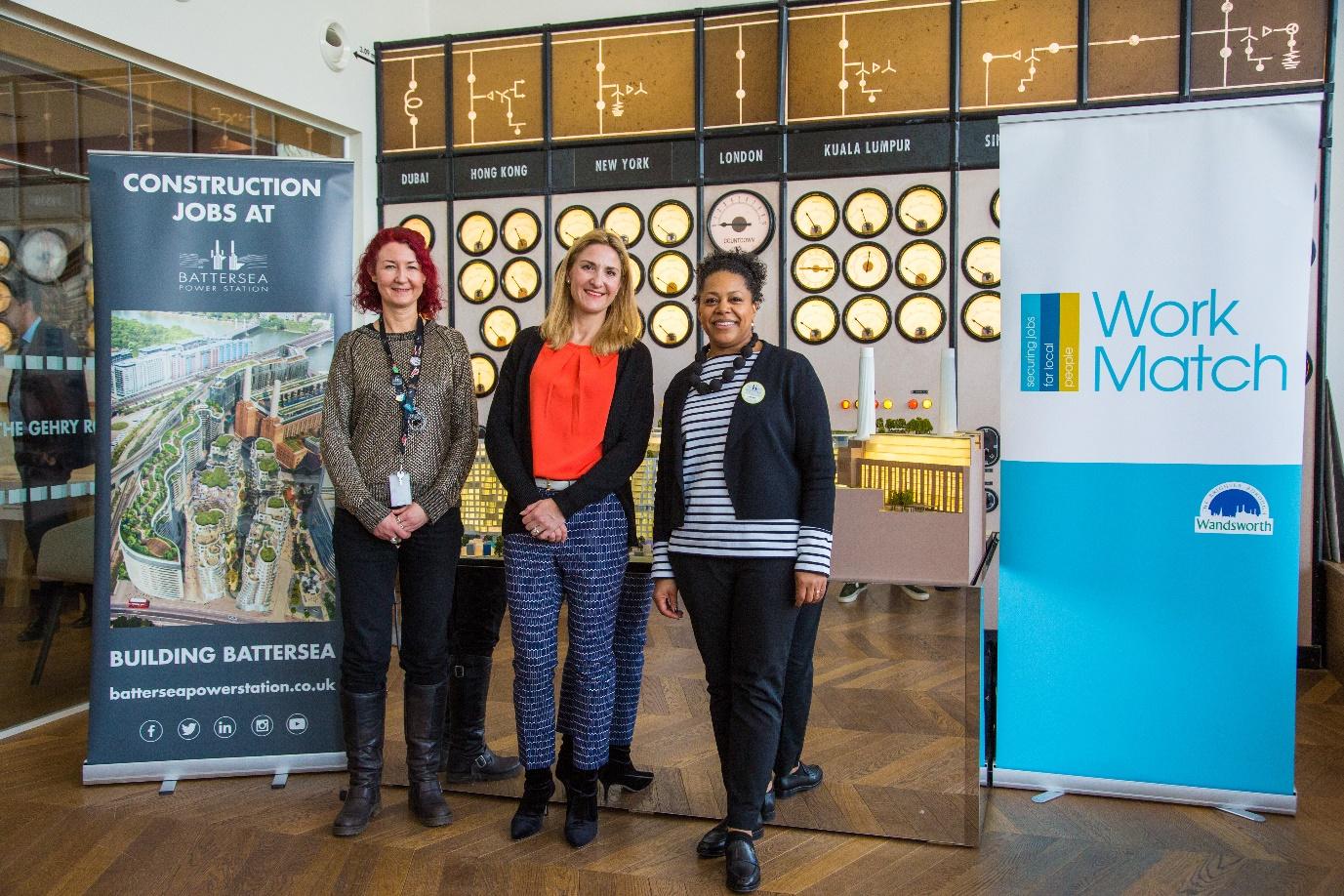 Over 150 people looking for work and training opportunities visited the latest jobs fair at Battersea Power Station this week.

The purpose of the jobs fair is to introduce local people to businesses and contractors working at the Power Station so that they can be matched with jobs and training opportunities.

Jobs and training opportunities range from work at the shops and restaurants which are already operating at Circus West Village, through to construction jobs and work involved in the management and upkeep of the development itself.

Cllr Kim Caddy, Cabinet Member for Employment, Skills and Business at London Borough of Wandsworth, who officially opened the jobs fair, said: “This famous building and the surrounding former industrial estate is now creating over 20,000 jobs and training opportunities for local people, as well as opportunities for local businesses to become part of the supply chain and prosper from the regeneration taking place on a site that had previously been derelict for 30 years.”

Sarah Banham, Communities Director at Battersea Power Station, said: “Job fairs are a really important way of connecting people directly to the organisations which can offer employment or training opportunities at Battersea Power Station.  A few years ago, barely a handful of people came to work at this derelict site, but now as construction is underway and the first shops, restaurants and offices have opened we are able to help people with career opportunities that simply wouldn’t have existed before.”

Over half a million people have already visited the new riverwalk at Circus West Village since it opened last year. The MBNA Thames Clippers River Bus service is now operational, putting Battersea Power Station within 15 minutes of the West End and under 40 minutes to Canary Wharf. A new pedestrian entrance has also opened, connecting Circus West Village with the rest of Nine Elms via Battersea Park Road.

Businesses already open include: Mother, a pizzeria from Copenhagen offering simple soul food (voted third best pizza in London), No. 29 Power Station West, a relaxed neighbourhood bar and restaurant serving great food all day, Italian restaurant Fiume where chef Francesco Mazzei serves classic Italian food from Calabria,  Wright Brothers, a new riverside seafood restaurant from the renowned London oyster and shellfish specialists, The CoffeeWorks Project, a family-run business serving the best coffees and tea from around the world as well as homemade cakes and biscuits, Vagabond, one of the UK’s first urban wineries offering 100 wines by the glass and a fantastic range of craft beers and seasonal food, Tonkotsu, an authentic Japanese restaurant known for its ramen and homemade noodles and Cinnamon Kitchen, the sister restaurant to Cinnamon Club from chef Vivek Singh, known for its modern Indian flavours and fiery dishes.

The Malaysian shareholders of the Battersea Power Station project are committed to giving back to the communities in which they operate. They recognise the importance of creating shared value and this is embedded in all their undertakings to ensure that they contribute to building a harmonious and caring community.

For further information visit batterseapowerstation.co.uk and follow @BatterseaPwrStn to keep up to date with the latest information, events and news.