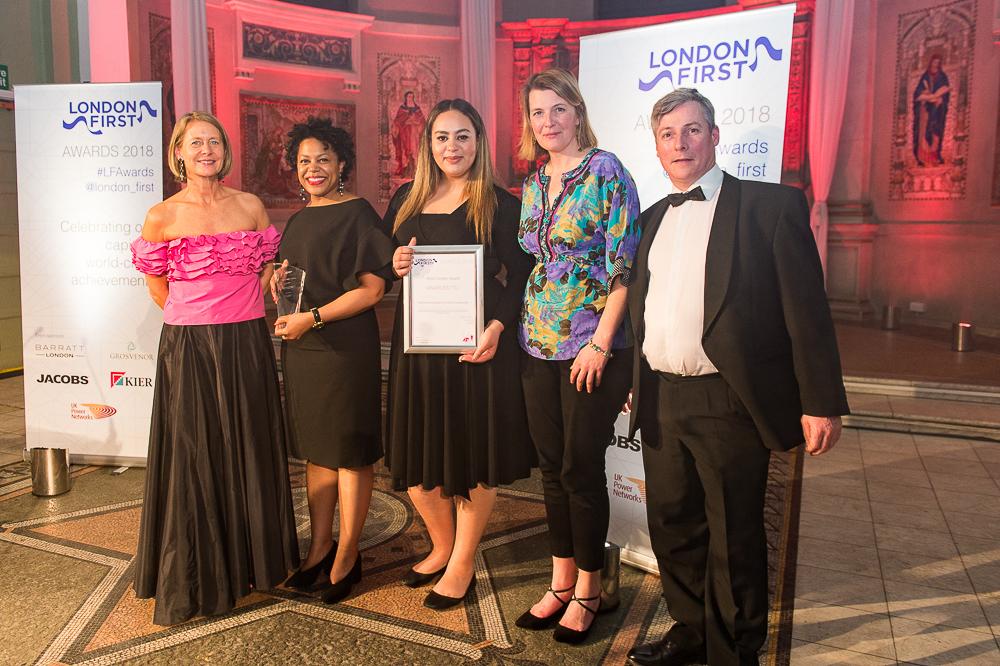 Battersea Academy for Skills Excellence (BASE) has won the Skills London Award, one of the largest categories, at the seventh annual London First Awards. The award presented is for those who go above and beyond to inspire, develop and equip young Londoners with skills for the future.

The award was presented to Andre Burwood, BASE Programme Director, by Jasmine Whitbread, Chief Executive at London First on 19 April 2018 at One Marylebone London.

BASE is a bespoke service that works in partnership with existing local job programmes to match local people to some of the 17,000 long-term jobs that will be available by 2025 at Battersea Power Station. Positions range from entry level to senior management roles within a diversity of sectors including hospitality, security, concierge, estate management and specialist roles. A further 2,250 jobs will be available in construction across the development.

Since construction started at Battersea Power Station in 2013, 393 local residents have found jobs and apprenticeships on site which, include 257 jobs at the retailers and restaurants operating at Circus West Village, as well as jobs in construction.

BASE’s aim is to prepare and support local workers, enabling them to take advantage of the job opportunities created. In March BASE, the contractors and sub-contractors for Phases 2 and 3, took part in the Battersea Power Station Jobs Fair. The event was very successful and attended by over 150 local residents from Wandsworth and Lambeth.

The Battersea Power Station shareholders, Sime Darby Property, S P Setia and the Employees’ Provident Fund, are committed to extending the socio-economic benefits of the development into the site’s neighbouring communities. The BASE initiative was created to drive long-term access to the new job opportunities being created at Battersea Power Station, working in partnership with the London Borough of Wandsworth.

Andre Burwood, BASE Programme Director said: “We are absolutely delighted to take home this award, it is a fantastic honour for the entire team working on the BASE programme. We are more committed than ever to help as many local people as possible to gain employment and develop their skills with us.”

Jasmine Whitbread, chief executive of London First, said: “London is a hugely successful global city, attracting talented people, investment and visitors from around the world. But we have to work hard to keep our capital the top of the global charts and delivering for the whole of the UK. These awards give us a chance to celebrate those with a vision for London’s future, helping to enrich our capital, creating growth and keeping London the best city in the world to do business.”

To read case studies of some of the local people who have found employment at Battersea Power Station please follow this link to Generating Opportunities, the annual report on local employment, training and business opportunities”