The peregrine falcon is the fastest animal on Earth. It has been measured in a dive at speeds of well over two hundred miles an hour – faster than a World War I fighter plane. Like a fighter plane, the peregrine hunts its prey in mid-air: it has special bony deflector shields in its nostrils which let it breathe while plunging to the attack at hundreds of miles per hour.

As one would imagine, peregrines aren’t afraid of many things. They often bully or kill much bigger birds, with the larger females being even tougher than the males though not quite as fast through the air. In olden times, medieval falconers considered the peregrine to be nobler and more prestigious than any other raptor except the kingly gyrfalcon. 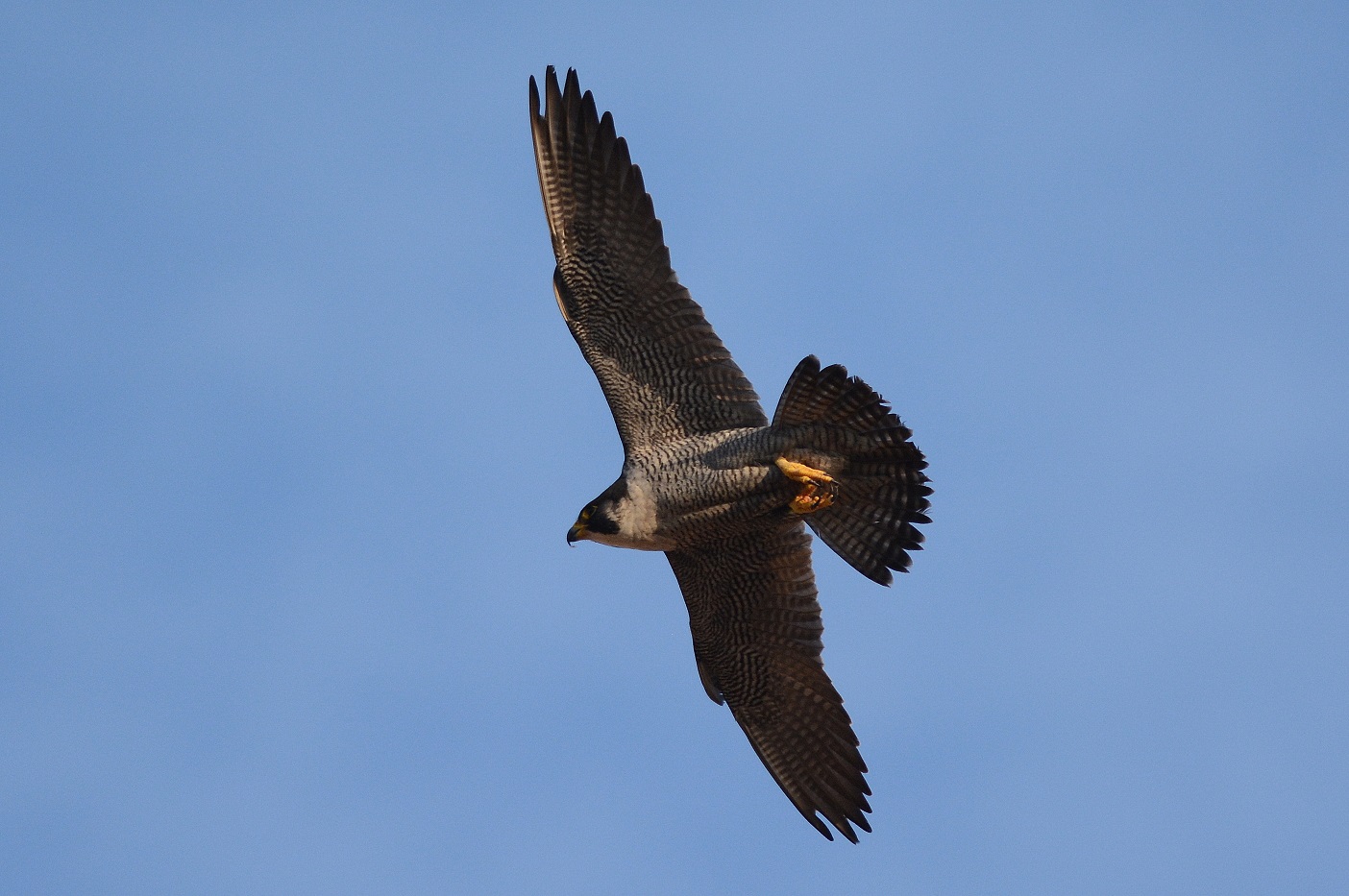 Despite being one of the most dangerous birds in the sky, the aggressive peregrine is defenceless against some threats. In particular it cannot survive the effects of the poisonous pesticide DDT, which was in widespread agricultural use from the 1950s to the 1970s. Peregrines eating prey which had fed on DDT-treated crops would build up high levels of the chemical in their bodies, poisoning the falcons and fatally weakening their eggshells.

Peregrines have also suffered since at least the 19th century from attacks by humans. Landowners and gamekeepers have been known to kill them to protect game birds, and a small minority of pigeon fanciers sometimes do so to protect their pigeons. By the 1960s peregrine falcons were almost extinct in Britain. But time has passed, and DDT is now used only to control the spread of malaria. Peregrines, as Schedule 1 birds, also received the strongest of legal protection under the Wildlife and Countryside Act of 1981 in the UK. The mighty falcons are now making a recovery in Britain and worldwide, though mostly in remote and hilly areas.

This comeback has also been accompanied by a phenomenon not seen before: noticeable numbers of peregrines nowadays nest and hunt in cities. The first peregrines were seen in London in the 1990s, and a pair moved in at Battersea Power Station in 2000 – some 17 years before the first human residents to the development. This was one of London’s first peregrine nesting sites: evidently the birds knew that it would be a desirable address.

In fact it has been more desirable than they could have realised. The peregrines’ original nesting site in one of the old Power Station’s wash towers – at the base of one of the building’s mighty chimneys – was ideal from the birds’ point of view. It was high up, sheltered, difficult for ground based predators to reach, and offered an excellent position for keeping a watch out for prey and rival falcons. At that time, very little activity ever took place up on the Power Station roof, which made the falcons feel secure.

“They don’t like anything near them at their own height, or higher,” explains peregrine expert David Morrison, who looks after the Battersea Power Station peregrines and other London pairs. “They don’t mind lots of activity down on the ground, but they want to be high above it.” 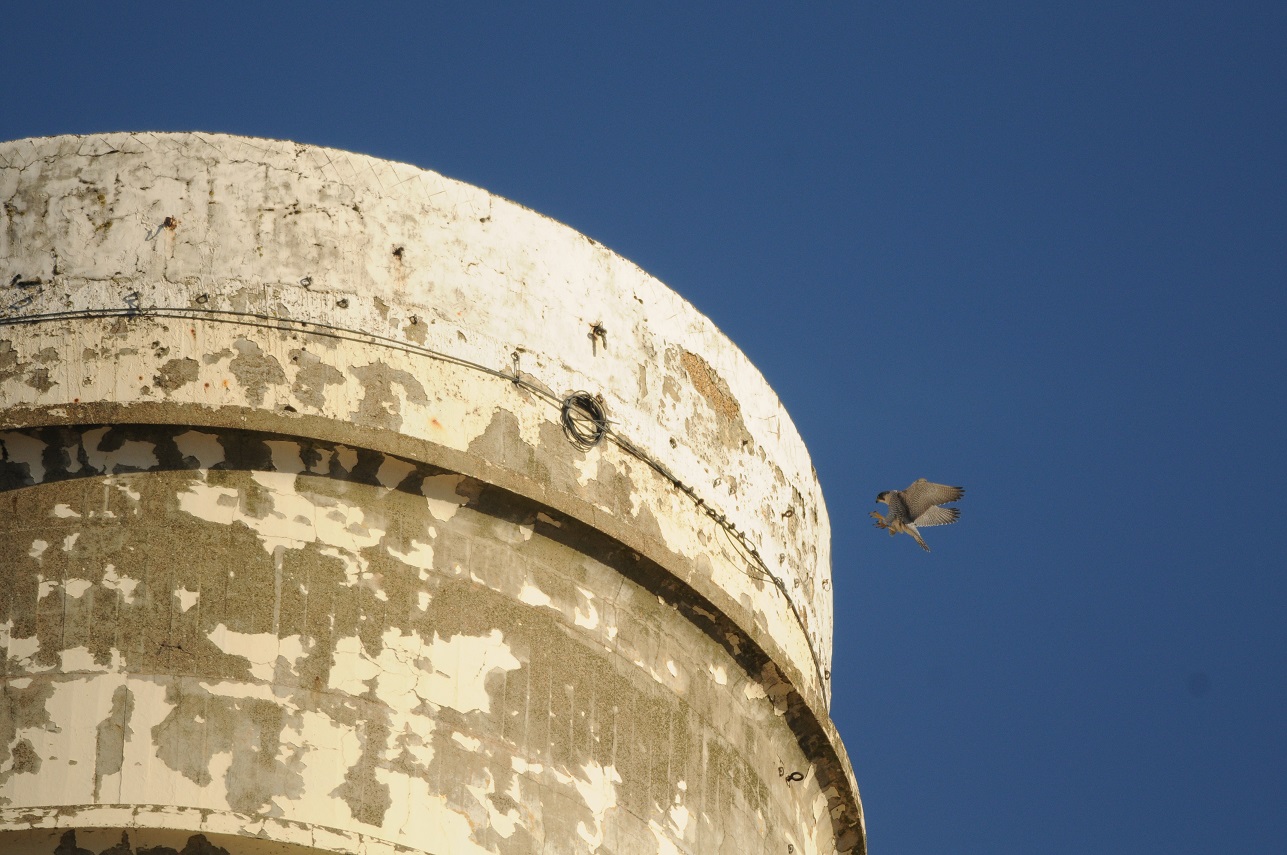 This presented something of a problem for the restoration of the Power Station, as peregrines in the UK nest at the same sites year after year. It’s not just illegal to kill them or steal their eggs or chicks: it’s also a serious offence to disturb them at all during the breeding season.

Morrison used to be employed in the construction industry in Battersea, but nowadays he’s a consultant licensed by Natural England and advises organisations on how to co-exist with peregrines nesting on their property. He’s always been a huge fan of peregrines and he worked with the Battersea Power Station Development Company to come up with a plan that would allow the refurbishment of the Power Station to go forward without breaking the law and disturbing the falcons.

The problem was that work needed to start on the Power Station building in 2013, including the careful dismantling and rebuilding of all four chimneys, and this would be illegal if the peregrines were breeding in the wash tower. As British peregrines remain at the same site and breed there every year, simply blocking off their old nest site would not do: the birds would be likely to stay and lay their eggs somewhere nearby. If they did so in the wrong place, building works could be stalled for the whole breeding season at enormous cost.

The solution was to provide the birds with an alternative, attractive nest site in a location nearby where they wouldn’t interfere with the construction programme or it with them. At a cost of more than £100,000, a tower of the same kind used to support large cranes was erected. At the top, a nest box designed to appeal to the peregrines was installed, at exactly the same height as the old one. When the birds finished breeding, Morrison closed off their old nest and waited.

“It was a tense time,” said Morrison. “You can’t be sure what they’re going to do.”

The situation was all the more worrying as there had already been a previous attempt to persuade the Power Station peregrines to move into a special tower, nine years earlier in 2004 under previous ownership. But that tower had not proved to be a success: the falcons only bred there once before returning to the Power Station building.

The new tower, however, turned out to be a triumph. The peregrines moved in straight away and have bred there every year since, successfully raising more than a dozen young birds. The falcons were unruffled when the tower was moved one year, in order to make way for further works. Everyone on the building site is involved in watching and helping the birds, in particular during the crucial fledging stage when young falcons are learning to fly and sometimes wind up down on the ground, unable to get back to the nest.

If that happens, all personnel on the Power Station site have been briefed on the falcon recovery plan. Workers guard the fallen bird, making sure it doesn’t fall victim to foxes or other threats. Once Morrison or a specially trained member of the construction team is on scene, they will carefully move the juvenile falcon to a high position where its parents can feed it until it is able to fly back to the nest again.

The new tower has generally been a great success in its mission of allowing the site’s human owners to do business without disturbing the falcons, but there has been one exception. In 2014 it had been arranged that Elton John would give a concert to a star-studded audience in the Power Station grounds. Unfortunately, however, the stage was found to be too close to the tower – the noise levels were likely to frighten the peregrines away from their nest.

At considerable cost and difficulty, most of the event including Sir Elton was moved inside the building, away from the nest. Guests listening to the music outside had to do so using specially provided headphones. The effort was a success, with the falcons successfully fledging three chicks that year. 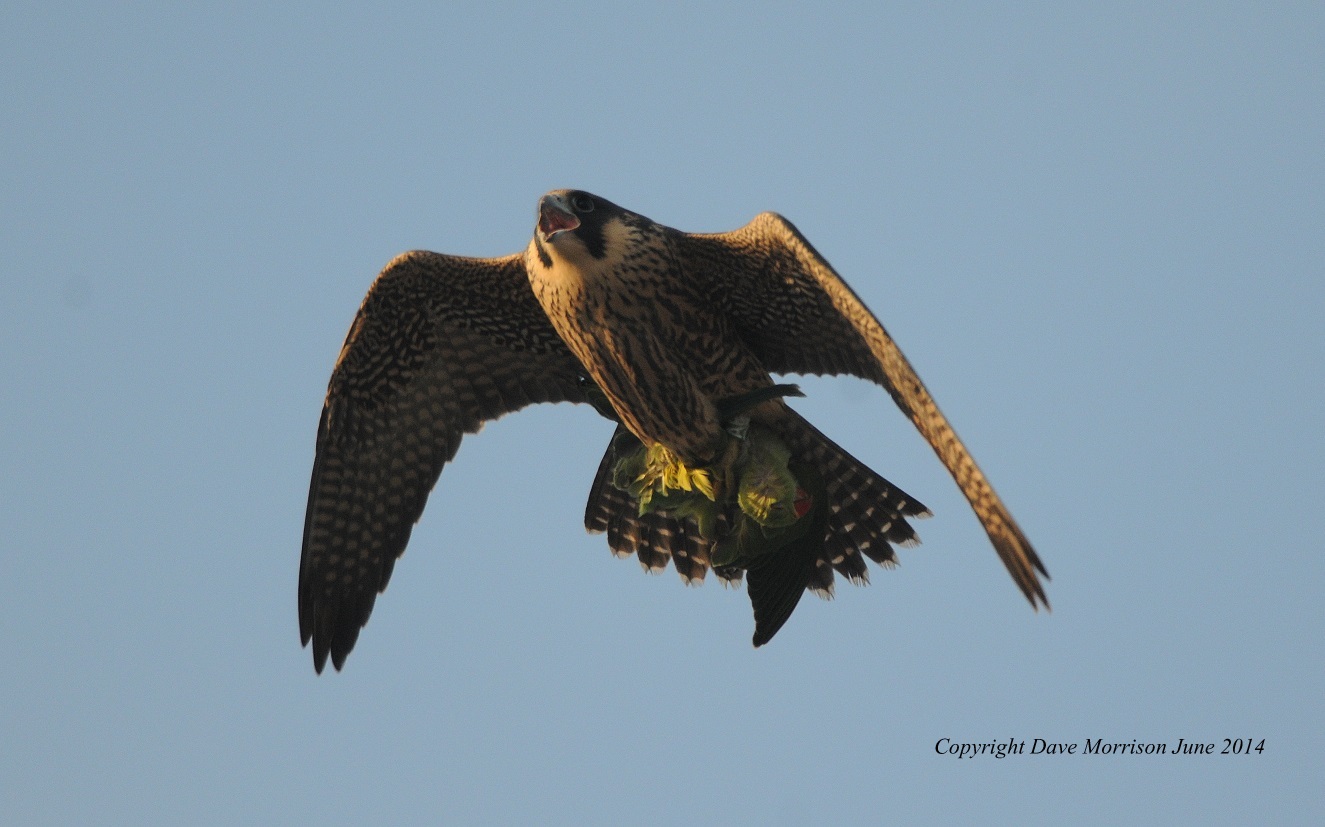 The peregrines won’t live in their tower forever. A new permanent nest house will be built into the northeastern wash house, and when work on the building finishes in 2022 the current tower will be taken down and the birds will be encouraged to move back in to the Power Station again.

Usually the location of an urban peregrine nest has to be kept secret, to avoid attracting the attention of egg collectors and other human menaces. But that won’t be necessary in this case: the Battersea Power Station falcons will enjoy security and safety on a par with the pair which nest in the Houses of Parliament – Morrison looks after those, also. And there’s plenty to eat, with a steady supply of feral pigeons and some variety offered by the migratory birds which follow the river. There are nowadays feral ring-necked parakeets in southwest London, too, offering another treat for the hungry peregrines. These are second only to pigeons on the falcons’ menu, due to their density in the area.

For peregrines just as for humans, Battersea Power Station is now one of the most desirable addresses in London.